“Our lives begin to end the day we become silent about things that matter.” Martin Luther King Jr.

Students ranging from fourth to sixth grade at Springbrook Elementary School in Irvine proudly represent The Springbrook Ambassadors. The group was established as the school’s leadership program. On Martin Luther King Jr. Day, this compassionate team of children chose to represent one of their own for their annual Day of Service project.

Michael Fullmer is eight years old, in third grade, and is a fellow student at Springbrook Elementary. Mikey, as he is affectionately called, suffers from a rare skin disorder referred to as epidermolysis bullosa. The disease causes skin to tear and blister easily. Mikey’s parents painstakingly wrap him in bandages daily to help to keep his skin from doing just this.

Nearly 80 students comprised of the Springbrook Amabassadors combined with South Lake Middle School and University Park Elementary set up a snack and lemonade stand on MLK Day on Mikey’s behalf in order to raise funds to apply toward research for epidermolysis bullosa. Motorists passing by the corner of Greenmoor and East Yale Loop in Irvine were so moved by the efforts of these deeply empathetic children to the point that their contributions culminated into a grand total of $1,141.00! To make a donation or to learn more about epidermolysis bullosa, please go to ebresearch.org. The EB Research  Partnership was founded by Mikey’s parents when they merged their fundraising arm with a New York families organization that too have a son suffering from the same disease.

O.C.’s Hair Police would like to recognize the unconditional kindness of the students of The Springbrook Ambassadors as our most recent In It To Win It recipients while we offer our support of their efforts toward their schoolmate, Mikey, with a donation to EB Research in their name. So often, we bypass the power of a child’s heart in our busy days as they remain before us patiently awaiting to be called upon. O.C.’s Hair Police encourages taking a moment to glance their way to embellish in this gift for as Henry Ward Beecher once stated, “Children are the hand by which we take hold of heaven.” 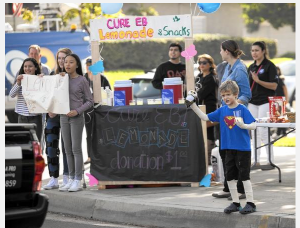 Hey Kids, tell your parents you have an idea that would be a “Whale” of a good time for only $5.00!! Beginning January 24th, the Dana Wharf and The Wyland Foundation will join together in offering a 2 child p/one paying adult package at an incredible offer of $5 p/kid, ages 3-12.   Each child will enjoy a 2 hour whale watching trip on the 95 ft. Dana Pride while receiving an art lesson and gift from Wyland’s Studio prior to their voyage. To enhance your trip, Science Kids offers “fun facts” about whales.

The whale migration along our coastline is occurring right now! From January 1, 2015 to January 13, 2015 the Newport Landing Whale Watching Company has reported spotting 68 whales off our local coast while nearly 80% have been Grey Whales with Killer Whales, or Orca’s, “spouting” up ten-fold!

During the early winter, the Grey Whale migrates south to breed in the warm seas along the Mexican coastline wherever they are able to find shallow lagoons. The whale migration seems to be happening in big numbers this year. With this at hand, just maybe Moby Dick will be spotted 164 years after the great white whale was first written about! Share your tall tales of the sea with us upon your return.